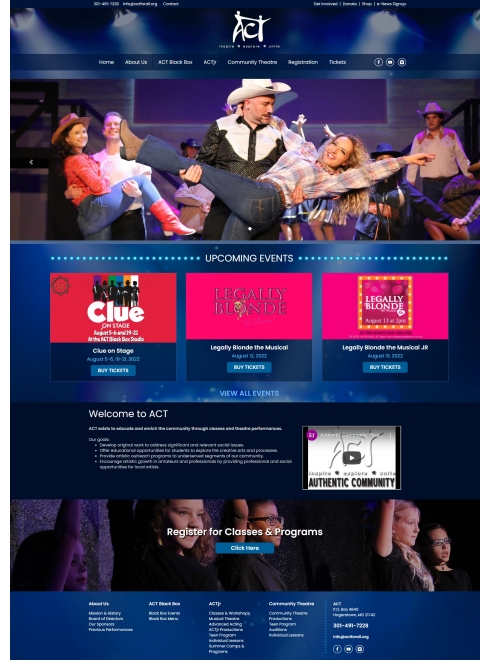 Authentic Community Theatre began as a creative collaboration between Hagerstown native Niki Perini and English drama educators Tony Goode and Warwick Dobson. The trio met at an educational drama workshop run by Tony and Warwick in New York City. ACT became an official not-for-profit organization in the spring of 2005, and its first undertaking was the 2005 Summer Institute for the Arts (SIFTA). SIFTA was designed to bring together like-minded artists and arts educators committed to the development of community music, arts and performing projects throughout the Mid-Atlantic region of the United States.

The organization has participated in everything from variety shows to art shows and from small showcase performances to the best known Broadway classics. The organization continues to grow and develop their programs by adding relevant productions and classes available to all ages.

In 2005 the organization started its Summer Institute For The Arts (SIFTA) program which includes a week long performance camp at the Maryland Theatre in downtown Hagerstown as well as a Visual Arts camp located at Doubs Woods Park. Each camp hosts 80+ campers and are still running today.

In 2009, with the amazing support of the Nora Roberts Foundation, Authentic Community Theatre, Inc.’s Creative Arts Team brought an original “storytelling” to parks in Washington County. ACT eventually partnered with the Washington County Free Library System to present these original storytelling performances in several library branches to promote their Summer Reading Program! The program has grown to include outreach days with the local Meal Machine program and provides free books to all who attend the performance for summer reading as part of their outreach efforts in Washington County.

ACT has offered classes in voice, dance, and acting over the years and has changed and developed its classes to include a wide range of theatre based knowledge for its students. In 2012 they started a theatre program for students in grades 1-8 called ACTjr. The students in this group have an educational experience by learning the in’s and out’s of theatre from a performance perspective. ACTjr performs two productions a year and in 2018 partnered with the Maryland Theatre as their home for their productions.

After the addition of the Community Theatre program, ACT began to grow quickly. In 2018 the organization relocated to a larger facility that provided them with a larger rehearsal space, more classrooms, and more overall space for the organization. With the demand for more productions on the rise the organization started developing more programs to meet the need.

Next Article: Have a Happy and Safe 4th of July!